One small note of errata → at 42:25 Addie says, “…yeah I don’t think we use chloramphenicol in the United States. I don’t think it’s approved here. It causes gray baby syndrome, right?” Well, just to correct the record: it is approved here, it has just fallen out of use due to the side effects and better alternative drugs. This paper notes that chloramphenicol “was released for use in the United States in 1949, but due to reports linking its use with the development of aplastic anemia it has long been put aside and is not used as standard therapy in the developed world…”

Episode 8 features a man of mystery, complete with cover identity and the wryest of jokes. You’ll know him when you see him — be on the look out for: his fabulous accent, small platelets, low IgM, high IgA & IgE, the clinical triad (thrombocytopenia, eczema, and recurrent infections), and risk of lymphoma. He only has one X-chromosome, and unfortunately it has a mutated WAS gene (which encodes WASP → the Wiskott-Aldrich Syndrome Protein). Addie mentioned a viral vector gene therapy that was successful, but sadly left 7/10 participants with blood cancers. So hematopoietic stem cell transplant remains the only curative option.

A paper published in the last week in Jama Open Network looks at a year’s worth of standing-scooter-related injuries at two emergency departments in Los Angeles. The results show ~40% of those evaluated had head injuries, 31% fractures, 2% intracranial bleeds. Additionally, only ~4% were wearing helmets, ~5% were intoxicated, and finally: there were more scooter injuries treated than those of bicyclists or pedestrians. Given that scooters have only recently appeared* and are growing in popularity, this might portend more scary study findings in the future. (*They appear to have launched in Feb 2018 in Santa Monica, for example.) 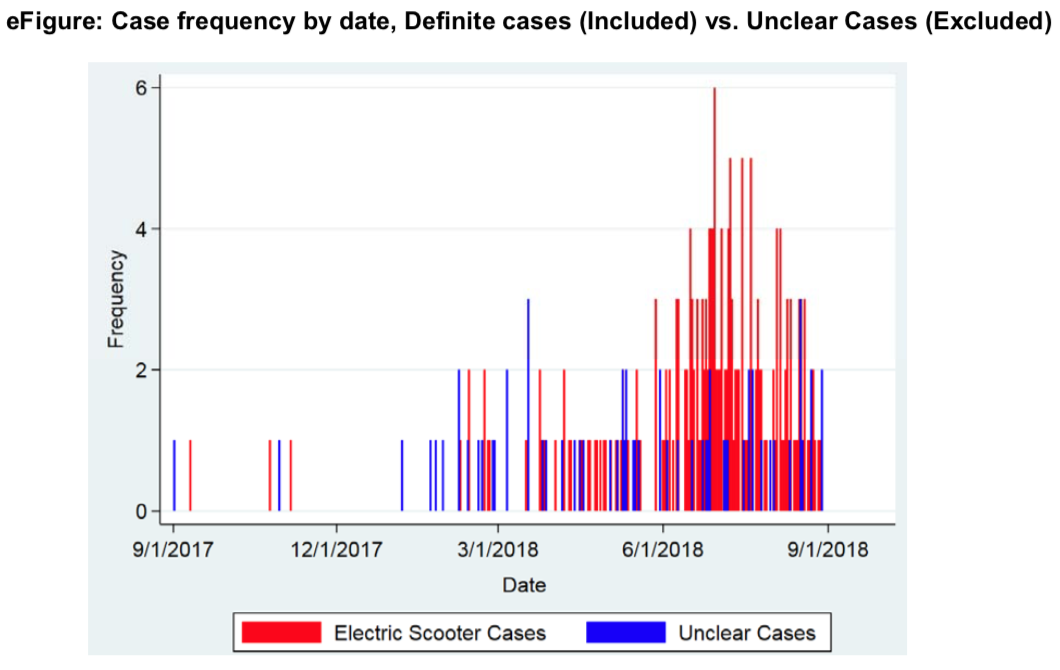 Do EpiPens expire? There are, as we noted, mixed results on this question. Partly it seems the difference in answers may have to do with real-world variables (differential exposure to light and heat, time past expiration date, etc). And partly it seems it might have to do with investigators overlooking salient aspects of testing for biological activity in the remaining epinephrine. To quote a 2004 study that looked at the racemization of epi into its inactive form, “The modeling revealed significant differences in the degradation kinetics in the formulations produced before and after 1997, whose cause remained unidentified in this study.”

I located a number of studies of EpiPen degradation that tested expired EpiPens and returns a range of results → [84-102%] [84-100%*] [50-103%] [13-31%]. “In neutral or alkaline aqueous solutions, epinephrine is unstable. In the presence of heat, light, and/or oxygen, it decomposes into colored compounds adrenochrome, adrenolutin, and melanin, which lack the pharmacologic activity of epinephrine. The epinephrine solution turns pink, then brown, and eventually black insoluble particles form.” Most of these papers say something to the effect of, ‘if the epi is discolored or has particles floating in it when examined through the viewing window on the device, it is likely not safe to use; if it’s still clear but expired and the situation is life and death, well, it may be safe to use but have reduced effect.’ Here is a review paper with incredibly thorough tables, showing many studies of adrenaline degradation under various conditions. *See also: these two critical replies: [1][2] 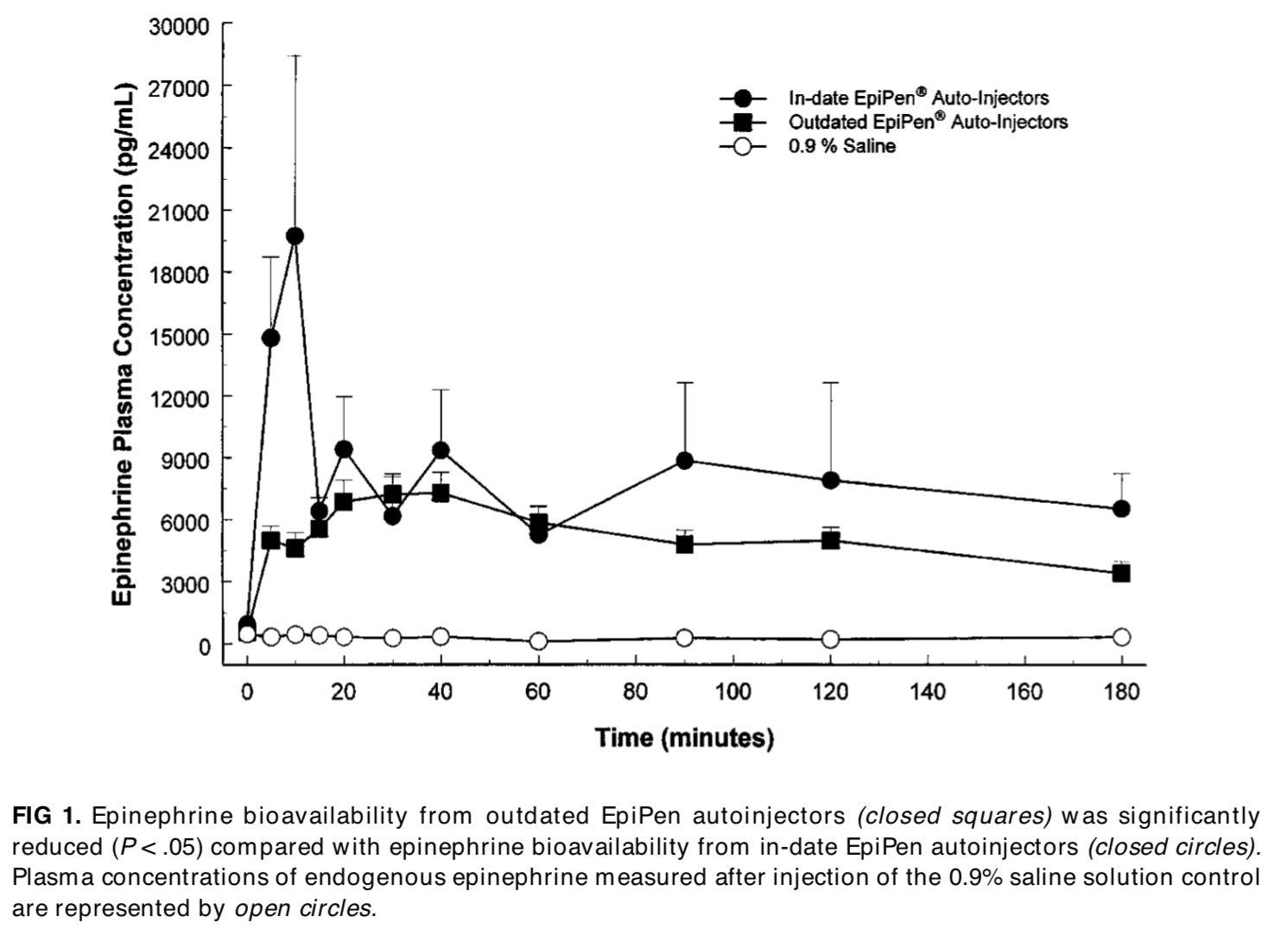 We also discussed a paper with some surprisingly brutal lacerations caused by EpiPen injections-gone-wrong. The image seen above is the photo we were commenting on from ‘Case 1’ in the paper (more images in the slide deck here). The main takeaway from the paper is the need to restrain the limb you plan to inject if you are dosing a child or anyone else who might unexpectedly flinch or kick.

FDEIA is also called ‘FEIA’ variously in the literature. This may be non-specific such as eating any food within a few hours of exercise. In some of these patients, they only develop anaphylaxis if they exercise within a few hours of eating a specific food such as wheat, tomatoes, peanuts, etc. They don’t get an allergic reaction if they eat peanuts and sit around. They don’t get an allergic reaction if they run a marathon. They only get anaphylaxis if they eat peanuts and then exercise in a few hours.” Even more intriguing → case report of a 14-year-old boy who did not develop symptoms of FEIA after ingestion of [rice OR ‘umeboshi’ (Japanese plum)] + exercise, but did get FEIA after ingestion of the two foods together + exercise. Recent papers focusing on physiology of FEIA suggest that a certain pH (etc) may be a prerequisite for an attack, which could explain the role of exercise.

Penicillin rash and EBV, maybe it’s just coincidence? And another paper, “De-labelling self-reported penicillin allergy within the emergency department through the use of skin tests and oral drug provocation testing.”

We also talked about Rh(-) status and RhoGAM. Addie mentioned that administration of RhoGAM (such as for spotting or a threatened miscarriage) before 12 weeks gestation is controversial. The Cochrane Review says, “…there are insufficient data…” for what to do with the, “…unsensitized Rh-negative mother after spontaneous miscarriage.” NICE (in the UK) says not to do it. A Canadian gynecological society says you should do it. Here is the original 1967 paper on which RhoGAM is based.

For EBM this week we discussed adaptive trial designs. Addie mentioned an ECMO trial published in 1985 that used an adaptive design based on an algorithmic work from 1969 and 1978 to show that ECMO could be effective in neonates. This appears to have been the first adaptive trial in the medical literature, and it caused a lot of controversy. A subsequent Harvard study, while also adaptive, had a more traditional design, and came to the same conclusion (at the cost of 4 deaths in the conventional treatment arm). In 1996, the issue was laid to rest, when a conventional RCT study (published in the Lancet) was stopped early as a result of 30/93 deaths in the ECMO group, versus 54/92 in the conventional treatment group. Eleven years after the first trial was published, ECMO made its way into the orthodoxy. FDA 2018 guidance on adaptive trial design is here (the first document they issued on this was in 2010).

Hosted by Addie, Kim, and Alex. Audio production and editing by Addie. Wiskott-Aldrich voiced by an anonymous MS2. Theme music compositions (Too Cool, and Laserpack) by Kevin MacLeod of incompetech.com, licensed under Creative Commons: By Attribution 3.0 License.