This week on Recall Bias we’re discussing shock … And as an addendum to last week’s episode: Addie came across some papers on lead resorption from bone in the setting of osteoporosis, which seemed like an interesting physiological thing worth mentioning. Just before the one-hour mark in the episode Addie mentions that ESFCOM stethoscopes can be used as a bell or diaphragm based simply on pressure — for those who haven’t heard about this, see here.

At its base level, shock is about hypoperfusion of tissues, although blood pressure is often the surrogate marker of interest. The types we discussed include: hypovolemic, septic, anaphylactic, cardiogenic, neurogenic, and maybe-kinda-sorta obstructive.

The ‘shock index’ is a concept originally proposed in 1967, but has really caught on in recent years. There’s this 1994 paper that says to be wary of shock when the index exceeds 0.9, and then more recently a number of papers looking to propose (or validate) SI for various specific shock-related conditions; particularly post-intubation hypotension. Like any other clinical decision tool, people start looking to dial up the performance by tweaking the algorithm. This has led to the pediatric shock index and modified shock index. Rather than get distracted with all of the granular possibilities, for medical students we think it’s most useful to stick with the very simplistic (no calculator needed!) and easy to remember shock index. So the main takeaway → if HR > SBP → your patient is precarious.

For anaphylactic shock we talked about epinephrine IM injection and the basic usage of the epi-pen. The device directions say to hold the autoinjector in the muscle for a 10 second period, yet it appears from this video (recorded by a Seattle Children’s Hospital pediatrician) that the 10 second countdown may be way overkill. Obviously we aren’t saying to ignore the directions, but this is curious. Alex points out that this is the EpiPenJR edition and the adult version may work differently. To get some sense of whether the penicillin-reaction that Addie saw in the ED was rare or not, I found this study. The study includes 5.2 million Kaiser members who had at least one visit during the study period. Of those, 1.8 million got an oral penicillin, and 172k got a penicillin injection. There were 18,122 new “allergy” reports (read: reports of things that may not really be an allergy), and 20 cases of anaphylaxis. Of the anaphylaxis cases, 17 were to oral drugs, and 3 to injected. One of the 3 injection cases was to the drug combo Addie mentioned. Here’s the ECG case that Addie mentioned, which we will likely cover in-depth during the cardiology block.

Addie told a story about a patient with an ampicillin/sulbactam [combo drug] reaction. While sulbactam doesn’t have a sulfa moiety, it’s also noted in the literature that things are more complicated than just ‘sulfonamide’ or ‘not sulfonamide.’

When Combat Application Tourniquet (CAT) use has been studied in laypersons, untrained persons were unsuccessful in applying the tourniquet 80% of the time. Of a study that looked at 151 prehospital care providers (21 EMT-B, 75 EMT-Paramedic, 4 firefighters, and a handful of RNs EMT-I etc) the results were that → “Tourniquet knowledge was poor for all groupings (with or without tourniquet experience, military experience, all certifications, all years of experience): 91% did not understand that wider tourniquets require less pressure for arterial occlusion, 69% did not know that stopping venous flow without arterial is harmful, and 37% did not know the correct tourniquet locations for distal limb injuries.”

Untrained persons can only appropriately apply a tourniquet about 1/5 of the time, but one study showed this more than doubles (to 44%) simply by including a 3×5″ instruction card. At least it did in a controlled environment — in a mass casualty incident it’s hard to imagine the success rate will increase. One window onto what the stress of battlefield and mass casualty situations does to efficacy is to consider another paper, by the same first author of the Boston Bombing study, which looked at medic application of military tourniquets in combat. “With tourniquets in place upon arrival at the forward surgical team, most limbs (83%, 54/65) had palpable distal pulses present; 17% were pulseless (11/65). Of all tourniquets, the use was venous in 83% and arterial in 17% … When ongoing bleeding or distal pulses were appreciated, medics tightened tourniquets under surgeon supervision until distal pulses stopped. Medics were generally surprised at how tight a tourniquet must be to stop arterial flow and convert a venous tourniquet into an arterial tourniquet.”

We also discussed REBOA → here’s a review article on REBOA from 2018. Slightly less intense, but following the same logic, we talked about intrauterine balloon tamponade in postpartum hemorrhage, as well as the Blakemore, Minnesota Tube, and Linton devices.

Addie noted that perhaps the most interesting part about all of this complex balloon tamponade stuff is the decidedly low-tech solution to secure the various tubes used for esophageal varicocele hemorrhage: a big ‘ol football helmet. In order to try to illustrate the surreal nature of trauma patients in football helmets, I offer you this Twitter post from 2018: 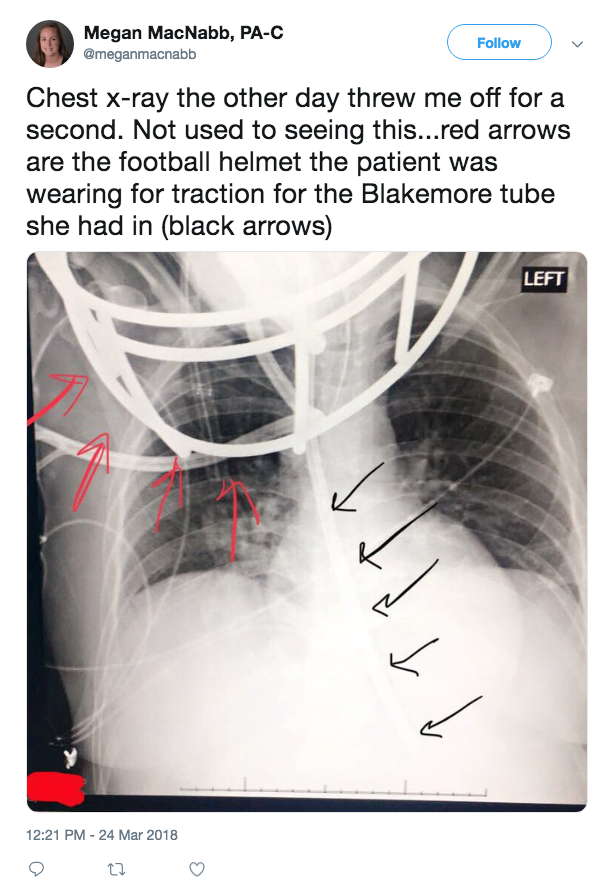 “Stay and play” versus “scoop and go” EMS strategies were discussed, with Alex pointing out that what holds true in an urban setting is not the same for rural. Here is a paper from Injury that reviews the salient issues and outcomes. One brief extract: “The Ontario prehospitalALS (OPALS) study considered data on 2,867 trauma patients in 17 cities comparing their outcome before and after ALS [advanced life support] was implemented. Essentially, 1,373 had prehospital BLS [basic life support] and 1,494 ALS. The two groups were comparable for age, blunt and penetrating injury ratio, ISS and GCS. After implementation of a system-wide ALS programme there was no improvement in mortality or morbidity. Looking at specific groups; in the patients with a GCS < 9, survival was worse after initiation of the ALS system than before (50.9% versus 60.0%; P = .02).”

Around 37 minutes into the program we discuss hemorrhagic shock and heartrate. Addie brings up a 1992 paper that looked at blood loss and average heartrate. Kim asked about decompensated shock being the final stage, and whether this paper contradicted that — just to clarify, because I didn’t manage to answer this exact point during the recording, I think Kim’s perception of shock is correct. The reason I wanted to include this paper was to make that point that people can potentially be in some serious trouble, particularly depending on their physiology, before their heartrate gets to a level where it’s completely obvious. And that when their heart rate finally does exceed their systolic, this may indicate a life-and-death situation where failure to act correctly in the subsequent minutes can have very bad outcomes. Which brings us to our next concept.

Hosted by Addie, Kim, and Alex. Audio production and editing by Addie. Theme music compositions (Too Cool, and Laserpack) by Kevin MacLeod of incompetech.com, licensed under Creative Commons: By Attribution 3.0 License.