Atrial fibrillation does not generally create a pulse that is palpable at the radial artery. I always palpate a radial pulse while also auscultating the heart. This way, if I detect “irregularly irregular” beats, I also have some sense whether those beats are a-fib or another rhythm. [Systematic review of radial palpation in a-fib]

The first sign of [which endocrine disorder] may be a-fib? (Supposedly a-fib is like 4x as common in this case.) [Answer: hyperthyroidism]

The majority of the time when individuals are getting a lipid panel they are told to fast before their panel is drawn. Why is that? We know that transiently there is a change in blood cholesterol following cholesterol intake (sort of like a cholesterol bolus), but the idea is that this is temporary and thus does not represent an individuals baseline/true levels. (PMID:7868978) 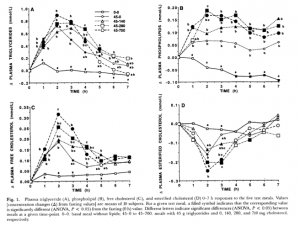 You can think of this similarly to glucose. If I ate a bag of candy, you wouldn’t immediately look at my glucose and come to a conclusion about whether I had diabetes, (unless I was above 200). Instead you would look at an A1c (in addition to one of those other numbers).

The issue with cholesterol is that a few papers have shown (using human and animal models) that atherogenesis occurs in the post-prandial period (https://doi.org/10.1161/01.CIR.60.3.473). This means that we may not actually be interested in those baseline cholesterol levels, but rather, we are interested in the cholesterol levels after a meal. This is particularly important when we think about the fact that we are more often than not in a post prandial state (since we eat every 8 hours or more frequently).

Addie also mentioned fibrates lower cholesterol but do nothing for mortality. And of course a citation was promised, so here is a Cochrane Review paper → Wang D, et al. “Fibrates for secondary prevention of cardiovascular disease and stroke.” Cochrane Database Syst Rev. 2015. https://www.ncbi.nlm.nih.gov/pubmed/26497361 … But really this is true of all the “extra” drugs Franke was talking about, not just fibrates. See below.

“The table [below] summarizes 29 major RCTs of cholesterol reduction … Notably, only 2 of these 29 studies reported a mortality benefit, while nearly two-thirds reported no cardiovascular benefit at all. These unfavorable outcomes and inconsistent results suggest that the lipid hypothesis has failed the test of time.” — Dubroff R. “A Reappraisal of the Lipid Hypothesis.” Am J Med. https://www.amjmed.com/article/S0002-9343(18)30404-2/fulltext 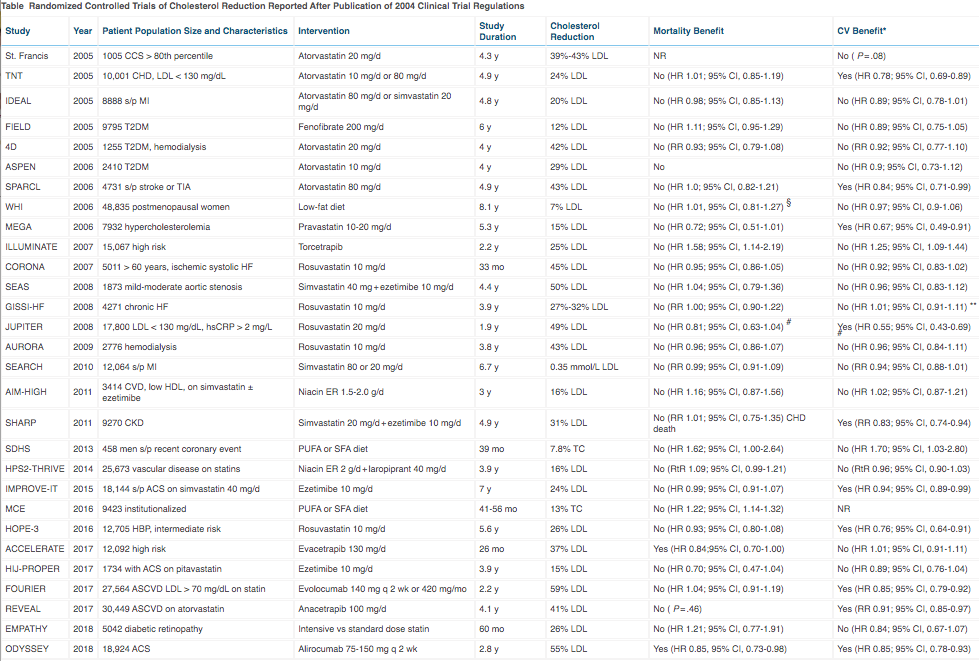 “The 2014 AHA/ACC guideline on the management of non-ST-elevation acute coronary syndromes (NSTE-ACS) states, ‘Therapy with statins in patients with NSTE-ACS reduces the rate of recurrent myocardial infarction, coronary heart disease mortality, need for myocardial revascularization, and stroke.’ Not referenced in this guideline was the Cochrane meta-analysis of 18 RCTs of statins for acute coronary syndrome that reported no benefit in 14,303 patients. Similarly, the National Lipid Association Statin Diabetes Safety Task Force concluded that the cardiovascular benefits of statin therapy outweigh the modest risk of developing diabetes. By reviewing only short-term statin studies, they overlooked the impact of long-term exposure.

→ NNT for statins in primary prevention?

The vocab word of the episode is → Lancinating

“Over time, neuropathic pain may become independent of the inciting injury, becoming burning, lancinating, or shock-like in quality…” — Bates’ Guide to Physical Examination and History Taking

A 67 year old female with a history of osteoarthritis, hyperlipidemia, and chronic a-fib is evaluated in the urgent care setting for a two day history of dysuria and urinary frequency. The patient’s workup includes a complete history, CBC, BMP, and urine analysis which is positive for nitrites. Three days later she is evaluated in a the same health system’s emergency department, secondary to a fall sustained at home. The patient requires transfusion of 5 units of FFP. The hospital system’s medical malpractice committee reviews the case. They are most likely to find:

“A total of 2944 participants were randomized to receive 1 of 3 explanations about a pair of cholesterol drugs (1 approved based only on a surrogate outcome [lower cholesterol] and 1 based on a patient outcome [reduced myocardial infarctions]).”

Hosted by Addie, Kim, and Alex.
Audio production and editing by Addie.
Show notes written by Addie (with a little bit of Alex).