In this episode we take a deep dive into the rise of CT scanning in America. Do we get too many CT scans? How much does this harm us? What level of variation in CT scanning exists from doc to doc? Then we spiral back to overdiagnosis. Finally, we talk DNR vs “allowing natural death.”

CT scanning — are we scanning too much?

General conclusion: With all things considered, CT scans have given us a lot benefits to medicine. A lot of progress has been made in decreasing the amount of radiation while increasing the quality and number of images we can get. We’re able to spend less time the CT machine and we’re able to control for artifacts like breathing and peristalsis much better, but it doesn’t mean it’s a perfect tests without any risk. CT still has much higher doses of radiation than plain-film. Based on that, there’s still a case that too many CTs are being performed by the United States. This may be based on over-scanning for certain diagnoses. The article mentioned chronic headaches, blunt trauma, and seizures. Weaknesses (is that too harsh?) in our healthcare system were also discussed, like when someone changes healthcare systems and they have to get rescanned and re-exposed.  [Summary and bullets above by: Kim]

“Variation in use of all types of computed tomography by emergency physicians.” Am J Emerg Med. 2013. https://www.ncbi.nlm.nih.gov/pubmed/23998807

I mentioned that being a mile away from an atomic bombing works out to ~100mSv of exposure. The citation for that is: “Effect of recent changes in atomic bomb survivor dosimetry on cancer mortality risk estimates.” Radiation Research. 2004. https://www.ncbi.nlm.nih.gov/pubmed/15447045

I made a comment about needing only a single scan for most patients who get stones, after which most won’t need follow-up scans. Here’s some substantiation for this → Rosen’s Emergency Medicine Concepts and Clinical Practice (2017) says the following on page 1218:

“Most patients with a history of nephrolithiasis and clinical picture consistent with renal colic should not undergo any form of imaging. Imaging is appropriate in patients with a history of nephrolithiasis who do not improve with treatment, have a uri- nalysis showing infection, have a solitary or transplanted kidney, or in whom a diagnosis other than renal colic is suspected.” 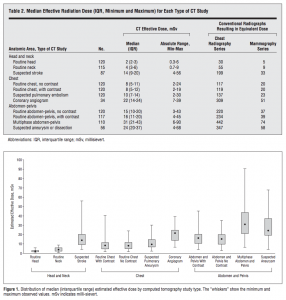 [Overdiagnosis = diagnosing something that is a “true positive” by some lab/histo/etc standard, but isn’t clinically meaningful]

BREAST CANCER: “Likelihood that a woman with screen-detected breast cancer has had her “life saved” by that screening.” Arch Intern Med. 2011. https://www.ncbi.nlm.nih.gov/pubmed/22025097

The field is literally changing the definition of papillary cancer to respond to decades of overdiagnosis and overtreatment. For more on this:

“DNR” (Do Not Resuscitate) vs “AND” (Allow Natural Death)

In keeping with the ‘spiraling’ theme of this episode, we close our our discussions by spiraling back to framing effects while looking at different ways of talking about death (and why we sometimes avoid it, or get it wrong).

“Allow Natural Death versus Do Not Resuscitate: What Do Patients with Advanced Cancer Choose?” J Palliat Med. 2015. https://www.ncbi.nlm.nih.gov/pubmed/25825919

[This PBS clip is absolutely worth your time to watch; it gets at the essence of the difficulties many have in coming to terms with what the future may hold]

Hosted by Addie, Kim, and Alex. Audio production and editing by Addie. Show notes written by Addie. Theme music (Too Cool, and Laserpack) by Kevin MacLeod of incompetech.com, licensed under Creative Commons: By Attribution 3.0 License.