In episode 015 we devote much of the episode HIV. In keeping with this, we also discuss AIDS-defining illnesses, including fungal infections and disseminated tuberculosis. We touch on PrEP, and then Alex closes us out with his story of contracting giardia.

The sociocultural history of HIV 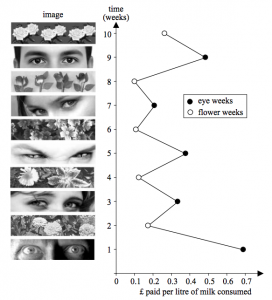 I mistakenly said that Dan Ariely had conducted the workplace coffee fund study, but I couldn’t find any such study with him as the author, and when I found the one I was thinking of, it turns out it was actually several other researchers. The point I was making about environmental influences is still correct, however, and I have included an image from the study  at right so you can see the difference in monies paid when flowers were present, versus eyes. What I’m about to say might just be wishful thinking (aka data torturing, aka statistically invalid subgroup analysis) but I do notice that the two pairs of eyes that are looking directly at the coffee drinker have the highest reimbursement, whereas those that are a glance from the side are much closer to flowers. (And particularly the pair that is wide-eyes and dramatically lit has by far the highest money paid per liter.)

Miliary (as in: miliary tuberculosis) → Mert & Ozaras. “A Terminological Controversy: Do Disseminated and Miliary Tuberculosis Mean the Same?” Respiration. 2005. [PubMed]

Hosted by Addie, Kim, and Alex. Audio production and editing by Addie. Show notes written by Addie. Theme music (Too Cool, and Laserpack) by Kevin MacLeod of incompetech.com, licensed under Creative Commons: By Attribution 3.0 License.